INTENSITY is a new kind of audio processor for mixing, mastering and sound design. Built on techniques typically found in facial recognition algorithms, INTENSITY brings out a sound’s inherent detail, increases its perceived loudness and density, and adds insane amounts of clarity. The unique algorithm carves out important signal features – making sounds sound more like themselves – and is operated with essentially one control. Between the proprietary algorithm and an optional soft-knee saturating limiter in the plugin’s output stage, INTENSITY also excels at attaining maximum loudness and creating a beautifully aggressive tone.

So what IS this thing, then? You can think of INTENSITY like an infinite-band compressor operating in relative terms – whose time constants are zero, and which is controlled by an artificial intelligence at audio rate – making it possible to adjust the process with essentially just one knob.
Or Actually, Do NOT Think "Compressor"

Well, except that this description would be completely inaccurate, as INTENSITY is absolutely NOT a compressor, and works in a completely different way. There's no RMS detector, no threshold, no ratio, no attack or release time. It doesn't pump or modulate in any other way. It doesn't overshoot and it works regardless of absolute levels and input type. That said, the compressor analogy does serve to give you an idea of when to use it and what for. 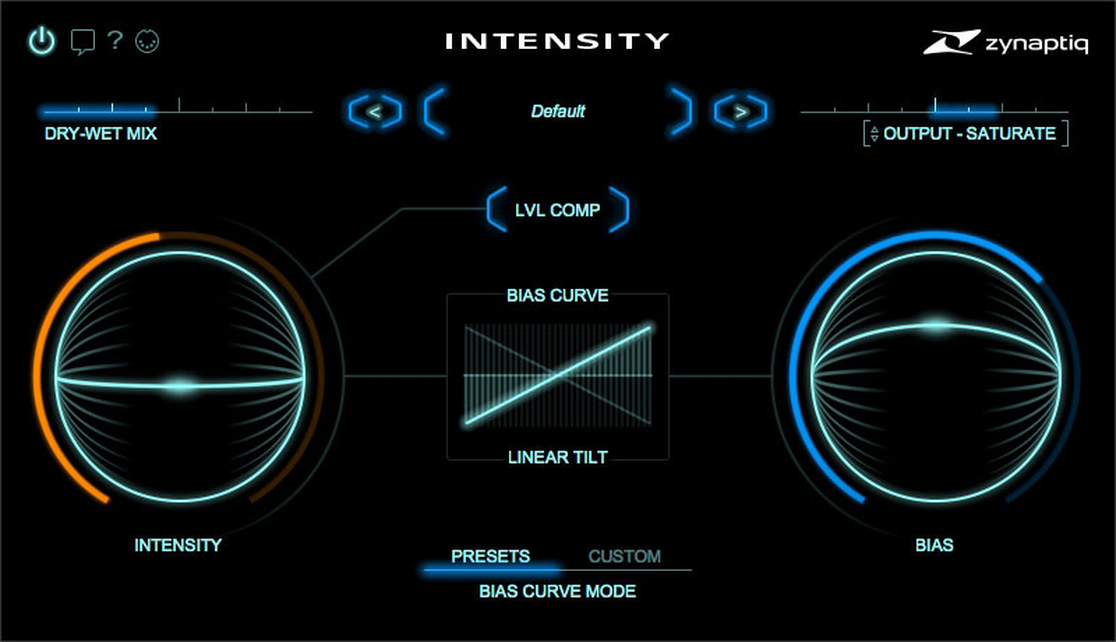 Across the Board
​
INTENSITY is equally suited for processing individual tracks like speech, SFX, instruments – including guitars, bass and piano – as well as full mixes, multi-channel film stems, drum busses, and other complex content. This makes INTENSITY an indispensable tool for music producers, mastering engineers, sound designers, video producers, broad/podcasters, forensics professionals, audiophiles, or virtually anyone to quickly and easily add clarity, definition, and perceived loudness to their audio projects.
Fast, Faster, INTENSITY!

This plugin is probably the fastest way to get great sound. No kidding. The actual, real-world usage story goes pretty much exactly like this:


In some cases, you may additionally:


That is literally it.
​TL;DR – Summarize that in Plain English, Please

OK, we'll drop the geek. It's a high-tech thing that makes everything sound way more awesome. Which is why we call it the "AWESOME!-Knob" in our offices. Put it on everything, all of the time.  Be careful, it's highly addictive. Plain enough? :-)
In Depth
Intensity
Bias
Preset Bias Curves
Custom Bias Curve
Saturate
Key Features & Specifications

This software uses the latest PACE copy protection, which allows you to place your activation on your machine or on an iLok 2* (or newer; not included). You will need a free iLok.com account to use our software, even for the the demos – but you do not necessarily need the iLok 2 dongle, if your machine has internet access (activation of a system without internet connectivity requires an iLok 2 device). All required software is installed along with our plugins, but we generally recommend downloading the latest versions directly from iLok.com.